Final entries are now available for the DNA indoor international in Glasgow this coming Saturday (5) and are available here by team and by event.

Great Britain’s Olympic Games 1500m silver medallist Laura Muir, representing Scotland, drops down to the 800m and will be one of the host nation’s best bets for maximum points in the 10 events that proceed the winner-takes-all finale, The Hunt.

The men’s shot put – the first field event to get underway on Saturday in two hours of action – features England team captain Scott Lincoln and Portugal’s 2017 World University Games champion Francisco Belo and the pair already know each other very well having competed against each other twice in the last week with the head-to-head score one apiece.

Spain have named a particularly strong team and features 2019 European indoor 800m champion Alvaro de Arriba and the in-form Enrique Llopis, who reduced the Spanish 60m hurdles U23 record to 7.59 in Karlsruhe, Germany last Friday and currently is Europe’s second fastest man over the barriers.

On paper the battle for supremacy in the long jump looks to be between England’s Abigail Irozuru and Portugal’s Evelise Veiga but with the special tactics required to succeed in DNA field events, the outcome is often unpredictable.

Each one of the six competing nations has its standard bearers.

Wales will be looking to the 2021 European U23 100m gold medallist Jeremiah Azu to impress in the 60m while Ireland’s Louise Shanahan has the unenviable task of battling with Laura Muir over four laps of the Emirates Arena but has showed plenty of big championship experience, including at the Olympics last summer, to make her presence felt. 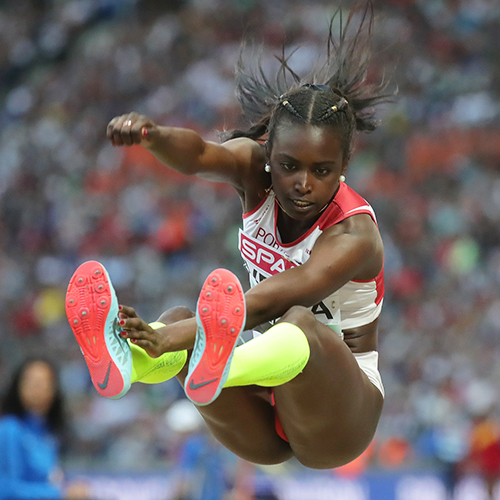