Host nation Scotland will be looking to impress in the DNA indoor international in Glasgow on Saturday 5 February not least because they have been able to name Tokyo Olympic Games 1500m silver medallist Laura Muir in their team.

Muir will be Scotland’s team captain in a venue and on a track she is very familiar with. She won over 1500m and 3000m at the 2019 European Athletics Indoor Championships in the Emirates Arena which utilises a hydraulic banked athletics track installed by European Athletics Partner Mondo.

Although all her major championship medals have come over 1500m and 3000m, Muir also has considerable pedigree over 800m and in 2021, at the Diamond League meeting in Monaco, she reduced her personal best with a Scottish record 1:56.73 and she currently stands at number three on the British all-time list.

With Muir contesting the individual race over four laps of the track, Scotland have entrusted the opening leg of The Hunt which is also over 800m to the talented Jenny Selman, who made a big breakthrough last year and improved her best to 2:01.64.

Along with Muir, Scotland’s best bet for maximum points in the ten events that precede The Hunt could be the high jump with Will Grimsey.

The full Scotland team can be seen here.

More details about the DNA indoor international in Glasgow on Saturday 5 February can be found here. 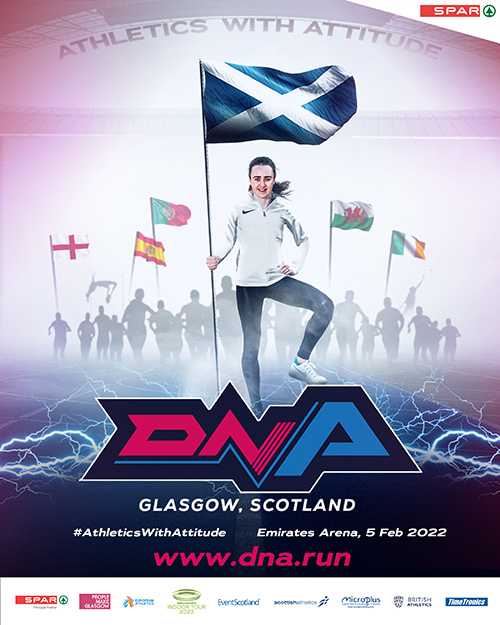