Team competition is emphasised in Dynamic New Athletics matches but there is no doubt that many fans’ gaze, not least the travelling England supporters, will be on shot putter Scott Lincoln at the DNA indoor international in Glasgow this coming Saturday.

Lincoln was announced as the England team captain last week after he sent his implement out to 20.73m at the BoXX United Manchester World Indoor Tour meeting nine days ago, the opening event of the World Indoor Athletics Tour and one of 14 Silver meetings to be held in Europe this winter.

The impressive performance moved him up to fourth on the UK indoor rankings.

Since then, Lincoln has travelled to Czech Republic where he has had two more modest competitions in the last few days – 20.07m for fourth in Kladno and then 20.09m for fifth in Hvezdy v Nehvizdech – but he will be back in action in Glasgow and bidding for maximum points to help keep England in contention for overall victory ahead of The Hunt, as well as get back to throwing long again.

“I’m nowhere near sharp enough yet and I’m not feeling light enough to throw further yet but we’re getting there. I’ve been doing a heavy volume of training, so we’ll see where it goes,” reflected Lincoln last week.

“I’ve not had much time on the competition ball as we’re obviously planning to go to a world indoors and being competitive there so it’s about building on what I did [in Manchester].

“I was actually feeling quite nervous. To be honest I’ve never been nervous before apart from the Olympics and it obviously worked out for the best as I nailed an indoor PB of over 65cm [in fact, 67cm in Manchester].”

Lincoln’s outdoor best is 21.28m and on the evidence of Manchester, that could be challenged this winter, perhaps even in Glasgow despite DNA’s head-to-head format which demand a different tactical approach.

Twenty-one metres is certainly a target for Lincoln, a distance only one Briton has ever exceeded indoors.

“I’m excited to be throwing at the DNA event in Glasgow and then it’s on to the British Championships before the world indoors.

“I think the DNA format is pretty coo!. I’ll see how it turns out and but certainly a head-to-head format is what gets us athletes going!

“It’s always special to compete for your country, especially England, there is something about wearing that rose on your chest but to be named as captain is just a true honour and can’t wait to get stuck in! I am always excited to compete in front of a British crowd, and hopefully this event will get the crowd excited to come and watch our home athletes as we prepare for the world indoors and a big summer ahead.”

“I want to show people I’m capable of breaking the British record and show how serious I am about this sport.”

The British records for Lincoln’s specialist event are 21,92m outdoors and 21.49m indoors and Lincoln will not be short of support as he tries to surpass them in the coming months starting at the DNA indoor international in Glasgow. 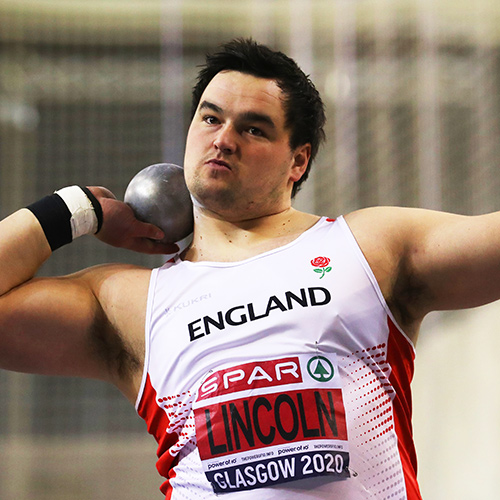