And what a debut it was.

Twenty-four of Europe’s best athletic nations – 413 athletes in total – competed over four days in the new athletics format in front of bumper crowds at Dinamo Stadium in the Belarusian capital.

Team Ukraine took top honours, beating the host nation by a fraction of a second in a thrilling mixed-gender medley relay race to conclude the two-hour final. Germany took bronze.

Many of the athletes gave glowing reviews of the DNA concept and the adoring audiences who came to support them at the 22,000-capacity stadium each day.

“There was crazy energy in the stadium,” said silver medallist long jumper Nastassia Mironchyk-Ivanova of Belarus. “I was bursting with happiness that we could fill a big stadium like that with sport spectators in our country.”

Italian high jumper Nicolas De Luca, meanwhile, said he enjoyed the head-to-head format of DNA. “It is pure adrenaline and I love this,” he said. “You have one attempt. You are in or out. That is amazing and I love it. I hope to compete again with this format. In the high jump, for who I am, it is really cool. It’s like a fight for your life.”

Unlike traditional athletics, DNA is a linear competition where each of the nine events begins only after the previous one has finished. It is team-based and mixed-gender, making tactics, coaching and team spirit key elements to success.

The carefully designed format means the action is non-stop and the final result is always in doubt until the very end. An entire DNA competition takes place in two hours, making it a perfect fit for TV and attractive to spectators and participants alike.

“I think it’s more interesting for spectators to watch because they are watching a match, and it’s more exciting for us as well,” said Hungarian sprinter Klaudia Sorok.

The Hunt proved to be a big hit with crowd in Minsk. The staggered start, based on the Gundersen Method, gave fans a clear idea of what was required for teams to win the competition. And more than once throughout the week the outcome came down to the wire, providing an exciting conclusion to the matches that often had the spectators on their feet.

While some argued the new formats for the long jump and high jump were a little too complicated to be readily understood, the vast majority of people interviewed said they thoroughly enjoyed the DNA experience.

“For a 45-year-old man like me, [DNA] was a bit difficult to understand at the beginning,” said Italian team coach Giulio Ciotti. “But seeing the competition live and living it myself was incredibly fun, and all our athletes, so they said, thrived in the collaborative environment.”

A professional group of internal and external experts worked for three years developing Dynamic New Athletics to be a team event that compliments the classical version of athletics. The product was designed to be TV, computer and mobile-phone friendly, using the latest technology to increase interaction with spectators and guide them from event to event in an entertaining way.

Going forward, European Athletics will carefully evaluate all the results, feedback and figures collected during the European Games to decide the future of DNA. EA will involve all stakeholders in its discussions to give DNA the best possible chance to grow and flourish, while giving athletics a permanent team element within the existing classic pyramid.

“We saw in Minsk that DNA works well both inside the stadium and on TV,” said European Athletics Vice President Libor Varhaník, the Council Member in charge of the project. “But there is a lot more to DNA than what we saw at the European Games. We will consider gradually introducing more and more technology and tweaking some of the competition formats to make the entire experience even more impactful and enjoyable for fans and participants.”

DNA was intended not only for elite competition but to be used at the grassroots level as well, as its linear and compartmentalised format allows it to be adapted in a way where some events can be removed entirely or replaced with other activities. DNA is therefore perfect for clubs and schools as it allows them to alter the matches to their individual preferences and timeframes.

“DNA was developed with young people in mind, so of course we would like to bring it to where they are,” said Varhaník. “But this will all be looked at in detail in the coming weeks. What I can say following our experience at the European Games in Minsk is that DNA has a very bright future.”

DNA in a nutshell 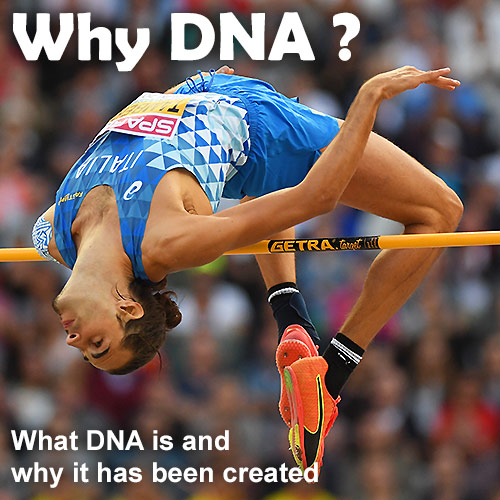